Our Founder and Spiritual Director 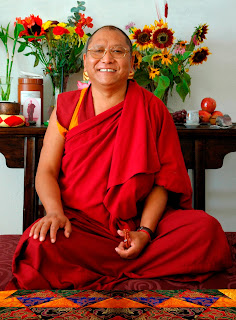 Kalsang Damdul was born in 1953 in a remote village in central Tibet. At just six years of age, he was included in a great wave of Tibetans who fled in the 1959 exodus from their homeland, across the Himalayas into India. Suddenly refugees, Kalsang and all the young Tibetan students found themselves in the newly-formed Central School for Tibetans in Mussoorie, India. At 16 years of age, Kalsang Damdul asked to take ordination as a monk in the Gelugpa tradition of Tibetan Buddhism. He joined the Institute of Buddhist Dialectics (IBD) in Dharamsala, H.P., India in 1973 to pursue graduate level studies in Tibetan Buddhism, rituals and meditational practices. He received his
Master’s Degree in Prajnaparamita Buddhist Philosophy (The Perfection of Wisdom Sutra) in 1980, and a second Master’s Degree in Mahdyamika Buddhist Philosophy in 1983. He received his Geshe Degree, which is equivalent to a PhD., in 1995 from the Drepung Loseling Monastery in Mundgod, South India. He received his Bhikkhu ordination from His Holiness the Dalai Lama.

Geshe Kalsang Damdul (Geshe la) has received many empowerments, lineal transmissions, and teachings from His Holiness the 14th Dalai Lama, from the late master His Eminence Lati Rinpoche, from the Gaden Tripa Lobsang Nyima, from the late master Denma Lochoe Rinpoche; also from the two senior tutors of His Holiness the Dalai Lama, and many other great Tibetan spiritual masters and teachers. Geshe la states that his main and root teacher was the late, Venerable Lobsang Gyatso, Director of the Institute of Buddhist Dialectics, and one of the most respected logicians, teachers, and meditation masters of the twentieth century.

Geshe la served as the translator for the late Dr. Tenzin Chodak, His Holiness Dalai Lama’s personal physician in 1985, and then for His Eminence Gaden Tripa, the Throne Holder of the Gelug Tradition of Tibetan Buddhism, in 1987.

Geshe la served as a member of the Advisory Council for Tibetan Education from 1998 – 2011. He was the Vice-Chair for the Tibetan Human Rights & Democracy Group. He has taught meditation to many Tibetan community members in various regions of India, including Tibetan Children’s Villages in Dharamsala, other Tibetan Schools in the NE region of India, and Tibetan Settlements in Chandra, India.

As the representative for IBD for 33 years, Geshe la attended many conferences and events around the world, such as Asian Studies, East-West Dialogues, Peace Conferences, and International Buddhist Conferences.

Over the years, Geshe la was the founding member of International Student Exchange Programs between IBD and Emory University in Atlanta, Miami University in Oxford, Ohio, and at Earlham College in Richmond, Indiana.

In May of 2001, Geshe la was recruited to become the spiritual director of the Northwest Tibetan Cultural Association in Portland, Oregon, where he remained for 1.5 years. In 2003, he founded Shakyamuni Tibetan Buddhist Center, also in Portland, Oregon. Geshe la has been our Spiritual Director and Main Teacher from that time to present day. He has come to Portland whenever his schedule allows to give teachings.

He taught summer classes in Buddhism as a visiting Tibetan scholar at Portland State University for ten years, from 2003- 2013. During these sabbatical summers, Geshe la also taught classes in Buddhism at Emory University and Earlham College. He developed a program through Miami University in Ohio that studied and demonstrated the positive effects of meditation on PTSD. Geshe la taught classes on meditation at a Women’s Shelter in Amethyst, Ohio and at Ohio State University in 2009 and 2010, and at UC Irvine in 2012.

Geshe la was elected by the Tibetan people in 2011 to be a member of the Tibetan Parliament in Exile. The duties for this newly formed government position included the inspection of six different Tibetan settlements, and overseeing the needs and the well-being of the Tibetan people who lived in his district. He served until his term of office ended in Spring of 2016. Geshe la states that he would like to spend these coming years teaching the dharma, to continue to oversee programs and projects that he has created, and fulfill his duties as Spiritual Director of STBC.

Karma Zopa began to focus on the Dharma in 1993 through Kagyu Changchub Chuling in Portland, Oregon. She was a mediator and adjunct professor teaching Conflict Resolution. From 1994 onward, she attended at least two Buddhist retreats per year. Reading widely in the Dharma, Zopa met Venerable Thubten Chodron in 1994 at Cloud Mountain Retreat Center and has followed her ever since.
In 1999, Zopa took Refuge and the 5 precepts from Geshe Kalsang Damdul and from Lama Michael Conklin, receiving the precept name, Karma Zopa Lhamo. In 2000, she took Refuge precepts with Venerable Chodron and received the Bodhisattva vows the next year. For several years, as Sravasti Abbey was established, Zopa served as co-chair of Friends of Sravasti Abbey. She has been fortunate to hear teachings from His Holiness the Dalai Lama, Geshe Lhundup Sopa, Lama Zopa Rinpoche, Geshe Jampa Tegchok, Khensur Wangdak, Yangsi Rinpoche, Geshe Kalsang Damdul, Dagmo Kusho, and others.

From 1975-2008, Zopa (Kathleen) engaged in social services in Portland in a number of roles: as a lawyer for people with low incomes, an instructor in the law and conflict resolution, a family mediator, a cross-cultural consultant with Tools for Diversity and a coach for executive directors of non-profits.
In January 8, 2008, Zopa moved to Sravasti Abbey for a six-month trial living period and shortly thereafter, she began using her refuge name, Karma Zopa. In May 24, 2009, Zopa took the 8 anagarika precepts for life, as a lay person. Zopa lived at Sravasti Abbey until March, 2013 when she began a one year retreat through Kagyu Changchub Chuling. Zopa offers teachings on the Dharma. In transition from the one year retreat, Zopa currently resides in Portland, regularly attends teachings and meditations at Kagyu Changchub Chuling and happily shares the Dharma at STBC, at the request of Geshe Kalsang Damdul.
Karma Zopa, katyohern@gmail.com

You see, the Buddha taught that anytime you voluntarily let up control, cease to cling to yourself, you have access to a tremendous strength and energy . . . this is because you’ve been wasting that energy all the time in a form of self-defense, and the moment you stop doing that, all that wasted energy becomes available.
Mark Winwood, Chenresig Project

I came to Tibetan Buddhism in a month-long retreat at FPMT’s Vajrapani Institute in Boulder Creek, CA in the summer of 1981, which was led by the great Lama Zopa Rinpoche, with Geshe Gyatso, Jon Landau and Jan Willis. I took refuge with Geshe Gyatso during that time, and then took the Bodhisattva Vows with Lama Zopa Rinpoche. I developed a very deep and heart-felt connection with FPMT at that time.

I was inspired to attend the first Dharma Celebration in 1982, staying in Dharamsala, India for three months. We were all so fortunate to meet many incredible teachers there: His Holiness Dalai Lama, Lama Zopa Rinpoche (again), Lama Thubten Yeshe, His Holiness Ling Rinpoche, His Holiness Zong Rinpoche, Robert Thurman, Jeffrey Hopkins, and other renown teachers and scholars.  Over the course of the next thirty years, I have continued to receive many teachings from those venerable teachers, and support those and other great Masters: Geshe Lhundup Sopa, Geshe Donyo, Yangse Rinpoche, Glen Mullin, Geshe Thardo, Gyurmed Khensur Rinpoche, Arjia Rinpoche, Thubten Chodron, Kuntse Rinpoche, Geshe Kalsang Damdul, and others. In this list, I also want to acknowledge all of the dedicated students of the Dharma, (in my experience this would be mostly the Sangha members from FPMT although there are so many others) around the world, who continue to work so hard and be a true inspiration to everyone. If I started to name the people I know and revere, it would take a very long sheet of paper.

Since 1982, as my family moved around the country, I have done what I could, helping to facilitate Dharma teachings and public events on Tibetan Buddhism in California, North Carolina, Pennsylvania, Washington DC, Oregon and Washington State. I’ve also promoted Tibetan Sacred Art: Sacred Music & Dance performances and Sand Mandala constructions from the Drepung Loseling, Loseling Phukhang and Namgyal monasteries that were relocated in India, to help support these great institutions, continuing to do this work in thanks for my teachers’ kindness.
Upon moving to the Northwest, I became involved with NWTCA and their effort to host His Holiness Dalai Lama in Portland in 2001. I’ve been a member of STBC since the beginning, with Geshe Kalsang Damdul. I’m currently on the board of STBC. I have led their Tara Practice Group for a number of years. I gladly host fundraising parties for STBC’s events, with an additional motivation to further a sense of community within our Dharma students and friends.

I have a degree in Liberal Arts, and over the years I’ve worked as a counselor, a clinic coordinator, a teacher in early childhood education and as an interim principal at an Independent School, among others. My husband and I have two wonderful children, of whom we are very proud.
I feel humbled and grateful to have had these opportunities. I continue to rejoice in the efforts and merit created by our kind Dharma Teachers and the Sangha members in our vast Dharma community.
Cat Wilson, catmwilson@comcast.net

Graduated in 2009 from Maitripa College with a Master’s Degree in Buddhist Studies.

Attended Geshe Sopa’s classes on the Mulamadhyamakakarika for three summers 2007-2009 in Madison, Wisconsin.

Spent two months in Dharamsala, India at the end of 2004 visiting Geshe Damdul. Stayed at a monastery, went to the Library of Tibetan Works & Archives, and hiked in the Himalayas.

Studied Charya dance from 2007-2118 with Prajwal Vajracharya, a lineage holder in the Buddhist Newar tradition of Nepal.  Visited Kathmandu in 2012.